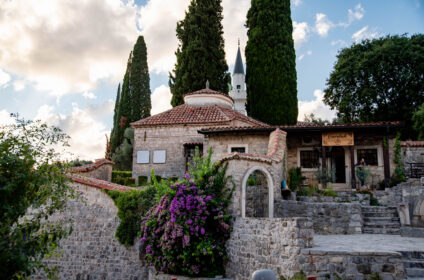 The Omerbašića Mosque was declared an immovable cultural asset – a cultural monument, and placed under state protection. It is located in Old Bar. It was constructed in 1662. It is simply built, with rectangular base and a minaret attached to the southwest wall.

Next to the mosque, at the entrance to the complex, the Dervish-Hasan’s mausoleum was built at the beginning of the 17th century. A smaller, ground-floor building was added next to it, to serve as a residential building. A public fountain was built next to the entrance, and later a house of the mosque intended for the stay of a hodja or imam. The whole area is surrounded by a stone wall.

Among historical, architectural and monumental properties, the following stand out: the Old Mosque in Velje Selo and the Škanjevića Mosque in Old Bar.

The mosque in Podgrad, the Tuđemil mosque and the mosque in Mikulići are important “mahallah” mosques, built with the contributions of kind people.