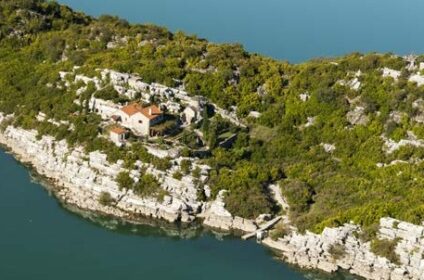 The monastery is located on the island of Starčevo on Skadar Lake. It dates from the time of Đurađ Balšić. It was founded by Father Makarije in 1377, who lived on the island as an ascetic, and after whom Starčevo was named. The monastery complex consists of the Church of the Assumption of the Virgin, konak building, supporting facilities and a fence wall with a gate and several built-in terraces. The monastery was a transcription centre. Many manuscripts were transcribed, and books were bound and decorated. The tomb of the printer Božidar Vuković Podgoričanin is located in this monastery. After the reconstruction of part of the konak and creation of living conditions, Starčevo is now inhabited and is an active monastery on the lake.